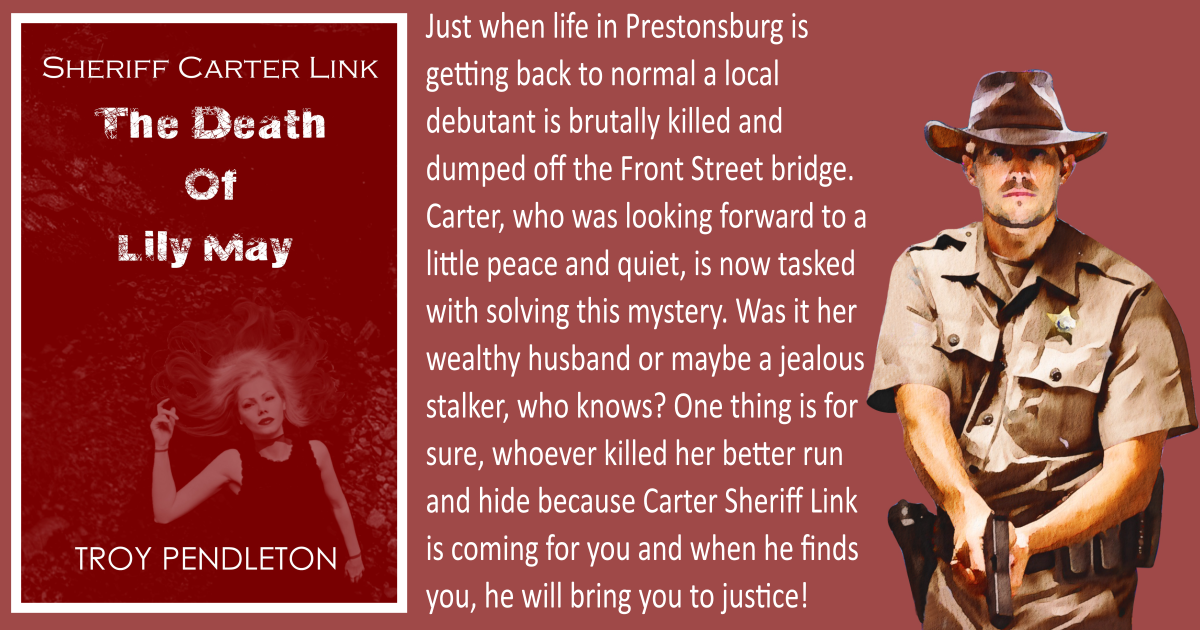 This book was a work of fiction. Names, characters, places, and incidents either are of the author’s imagination or are used fictitiously. Any resemblance to actual events or locations or persons, living or dead, was entirely coincidental.

Chapter 1: You’re Dead To Me

It was a cool fall night in the normally quiet town of Prestonsburg, Kentucky. Lily May, a town first lady and wife of Steve May, the owner of Bank of Prestonsburg, woke terrified in the back seat of a car, face down against the cold leather.

“You brought this on yourself, Lily. I tried to tell you but noooo, you wouldn’t listen,” a voice said to her.

“I know that voice,” she thought as she tried to shake off the fog of unconsciousness.

Warm blood ran down her neck from what felt like a large wound on the back of her head. The pain from it throbbed with every heartbeat. Her shoulders ached from the stress of her hands being tied behind her. She struggled to move her legs, which were bound together around her calves. Simply turning over would not be easy.

“I don’t know why you didn’t listen to me? Did you think I was going to let you go?” the voice asked.

This time she was conscious enough to know who the voice belonged to.

“Oh no! I’m going to die if I can’t get out of this car!” She thought has heart rate jump and her breathe became heavy.

A look of utter terror came across her face and all she could do was reflect on how dumb it was to stay late grading papers at school, by herself. If only she had left when everyone else had before it got dark.

Unsure about what time it was, she knew she left the school around 11:00 pm. She had lost track of time grading papers and wanted to get it all done, so she worked until everything was complete. Lily was a 6th-grade teacher and loved her job, but tonight that love got her in trouble. She had decided to go to a little house she and Steve kept in town, which was only about a half-mile or so. It was a cool night but the air was clean and brisk so walking sounded like a good idea at the time. She left the school and started on foot south toward the house. Normally it was a pleasant walk, but tonight was different. Shortly after leaving school, she began to feel uneasy and the last thing she remembered was a feeling that someone was watching her.

Flashing back to reality, Lily was terrified but knew she had to get away. As her abductor’s deafening rant continued, she slowed her breathing and began to control her emotions.

“Focus, Lily! You have to get free,” she said to herself.

She started to wiggle her legs around and worked the rope down to her ankles. Lily kicked the rope, now danged loosely around her feet, which freed her legs. Now she had to do something about her hands. Lucky for Lily, she studied gymnastics as a girl and was very limber. Though it was extremely painful, she was able to tuck her legs in tight enough to loop her arms over them.

“AAAHHH!” she wanted to yell as she stretched her arms over her legs but could only scream with her facial expressions.

Now with her hands in front of her, she was finally able to look and see where she was. She slow rose just high enough to see out the car window.

“We’re still in town? He must be driving around in circles,” she said to herself before the voice spoke again.

“Here we go…this is what I was looking for,” the voice said as they turned left on Front Street and then on to the bridge.

This particular bridge headed out of town to a pretty remote area, which was saying something for Prestonsburg. Lily knew if she didn’t get away quickly it was going to be over for her. She quietly reached up and unlocked the door.

“It’s now or never,” she thought as the car picked up speed.

If she could just get back to the first house north of the bridge. She pulled the door handle and jumped from the car. As the car continued to pick up speed, her body soared through the air for only a few seconds before crashing to the concrete. Lily could feel the pieces of chipped concrete and gravel ripping and tearing her skin as she rolled and slid down the road, but ignored the pain. Once stopped, she jumped up to her feet and hobbled back toward town as fast as she could. Each step caused excruciating pain and she could tell the fall had fractured some of her bones.

“If I can only make it to the end of the bridge,” she said to herself.

Within seconds of her getting to her feet, the car came to a screeching halt and the driver’s side door flew open. The extremely angry driver lunged out of the car and ran after her.

“HELP ME! SOMEBODY HELP ME!” Lily yelled, but her screams were drowned out by the noise of the running water under the bridge.

Her abductor soon caught up with her and was furious that she had jumped from the car. Suddenly she felt her hair clutched as her head was yanked backward. Lilly came crashing to the ground, breaking her tailbone. As she screamed in pain and horror, her abductor picked her up and covered her mouth, looking around to make sure no one heard her. With the realization that this had to end, Lily was pulled, with brute force, over to the side of the bridge and bent over the rail face first.

As she stared at the moonlight shining off the rippling water below, the abductor pushed into her, pressing against her broken tail bone, sending even more pain through her. Just when Lily was about to pass out from the pain, she could hear a whisper in her ear.

“You thought you could just leave me and get away with it? If I can’t have you, no one will. You’re now dead to me,” the cruel voice said, as a knife blade came up from behind her and cut her throat nearly ear to ear.

Blood poured from her neck like a water fountain and the pain was unbearable but screaming was no longer an option for her. The hand was removed from her mouth as the abductor stepped back and pushed her over the bridge railing. She fell, tumbling head over heels off the bridge until she felt the sharp pain of the rocks breaking her bones and the cold water against her skin. The cut in her neck, which sliced open her Carotid artery, was pouring blood and her life was slipping away. Lily laid there for only a few minutes, but it seemed like forever as her life flashed before her eyes. The battered and broken-hearted woman began to cry as she recalled everything she was leaving behind. She’d never have children or the joy of growing old with someone she loved. She won’t get to tell her friends how much she loved them and will miss them. Her life was over, and she knew it.

“I wish...I wish I had one more day to tell people I love them,” she thought but was finding it hard to focus.

With every blink of her eyes, it got harder to open them back up. Her breath got shallow, and she tried to swallow but was unable.

“How could this happen to me? Lord, don’t let my murder be unsolved. Avenge me father…avenge me,” she prayed as her mind drifted away.

Finally, her sight went, her breathing stopped and the beautiful Lily May laid dead all alone in the dark.